WORKING ON BEHALF OF OUR MEMBERS
Our mission is to drive sustainable demand for British wool in order to maximise returns for our members.
Home >  News >  Press Releases >  Aled Can Handle Success

As we head into the shearing season and British Wool launches its 2018 courses, we examine the achievements of 25 year-old Aled Jones, who has made a name for himself as a wool handling champion, the skill that is the very necessary companion to shearing.

Aled, an agricultural engineering graduate, was brought up on his family’s 400 acre upland beef and sheep farm, Dolyfelin near Builth Wells. The third generation to farm here, Aled combines working full time alongside his parents with seasonal work as a contract shearer.   Aled shears professionally across Wales and like many young people in the shearing industry has also spent time shearing in New Zealand.

It was when attending Newton College that Aled completed his first British Wool Training course and secured his Blue Seal.  Since then he has attended further courses and has now achieved his Bronze and Gold Seals, at Hay on Wye.

Since then Aled has gone on to win the Open at the Bath and West Show in 2016 and the Open 2017 Wool Handling Championships. His aim this year is to secure a place on the Welsh Team to compete in the 2019 World Championships in France.

His one regret so far is not making the final in 2016, resulting in him missing out on securing a place on the Welsh team to go to World Championships in New Zealand.  He adds “One tiny mistake can cost you majorly - a hard lesson to learn. You must give it 100% and concentrate!”

Aled is keen to continue to progress his skills, and if he could be given a Wool Handling lesson by anyone in the world he says it would have to be from Bronwyn Tango - Wales’ former world champion fleece roller.  “Bronwyn has reached the pinnacle in the industry as an internationally renowned wool handler. She has an almost unrivalled level of experience and knowledge of the rules as both as a competitor and a judge.”

How did this meteoric rise to success begin? Starting at a very young age Aled learnt his wool handling skills from his father and mentor, Ioan. As a highly qualified shearing and Wool Handling Judge, Ioan has judged shearing competitions across England and Wales. Since then, Aled has never stopped learning, and gaining inspiration, from others.

The best advice he has received came from his father, and was forthcoming when the rules changed and time became a vital factor:  “He told me to keep going as fast as you can!”

For Aled, Wool Handling remains purely a hobby, and it has been a hobby for many years. However, as anyone in the industry will say, it is also a vital skill needed as part of harvesting wool.  If you do not arrange and prepare the fleece properly your farm does not maximise the value of your crop.

“Many would say that shearing is the important element of the wool harvesting process. I disagree, wool handling and shearing are absolutely equal. You cannot do one without the other - it really is a partnership.”

He adds: “The vital skills required are, be organised, keep a clear head under pressure, knowing how to attack a fleece - arrange it, trim it and wrap it.” His advice to anyone considering a wool handling career is to:  “Practice as often as possible and take all the advice that you are given.”

He enthusiastically commends British Wool courses, adding: “The excellent instructors, with their experience and knowledge, combined with very good facilities, provide a great platform for learning new skills. I recommend anyone in the industry to take part”.

When he reflects on what he likes about wool handling, he jokingly puts aside the prize money, admitting that, “It keeps your hands soft when wrapping”. His favourite fleece is one that sticks or holds together well. Asked about his favourite type he replies: “Well, I do like a Mule Fleece.”

For Aled, wool handling is a hobby that he is passionate about, and he has his bar set high in terms of his future goals - Winning the World Championships!

Colin MacGregor from British Wool said, “Aled has gone a long way to achieving his goal as a wool handler, and he illustrates just how important handling is to the industry, and to shearing. Training is vital in helping you achieve maximum efficiency – whether it is sorting the wool crop at home, or stepping up to receive the champion’s laurels in competitions.”

“As an agricultural cooperative representing around 40,000 wool producers, British Wool has consistently prioritised training and knowledge transfer. Our training scheme is internationally renowned as being one of the best in the world and we continue to be the approved training provider for shearing and wool handling in the UK.

“We are increasing the number of wool handling courses we offer to meet demand from across all areas of the UK.  These cover wool handling on the farm, the benefits to the farmer and the importance of the fibre whilst emphasising excellent fleece presentation maximises the value of the wool.”

Held on host farms across the UK from late April to the end of July, these British Wool courses offer all handlers, of any age, the opportunity to learn more about their trade and advance their skills. 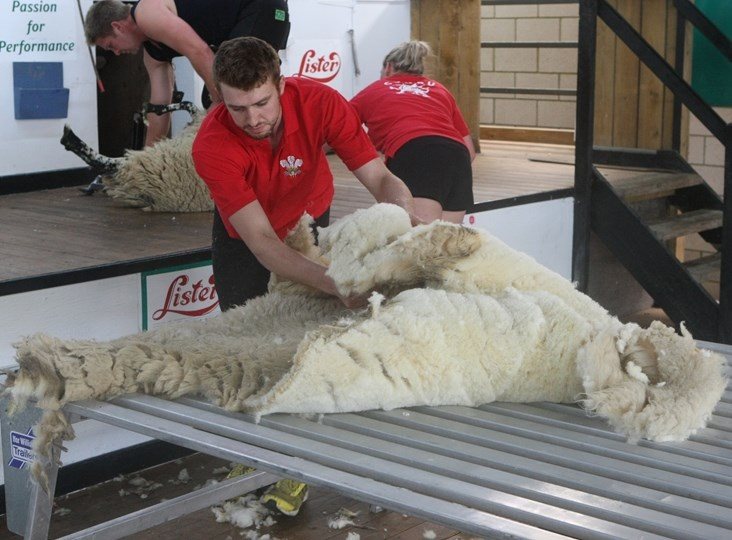