Caroline, who lives in Ceredigion, West Wales, has a flock of 70 sheep. After starting competing in 2011, she’s seen a string of successes, with wins at several major shows.

Caroline commented “My flock is the Noah’s Ark of sheep – a couple of nearly everything! I've got Jacobs, Welsh Mountain, Welsh Mules, Bluefaced Leicesters, Texels, Lleyn, Bowmonts, Gotland, Lincoln Longwools and also a lot of cross breeds – I love the variety and colours in the field.”

2017 was a year of success for Caroline, with two Champions and two Reserve Champions from two shows. Two of her fleeces also qualified for the British Wool Golden Fleece competition, with a Lincoln Longwool reaching the final. This year, Caroline is hoping to go one step further.

“I’m immensely proud to represent Wales in the Golden Fleece competition, and I’m aiming to reach the top spot this year! My advice to producers who want to exhibit their wool would be to look for a good clean fleece, typical of the breed, with a good strong staple. Skirt it and remove any vegetable matter and roll it tidily - a well-presented fleece is more likely to catch the judges’ eye. It’s always worth speaking to the judge after the competition too - talk through your fleeces with them - what were the good points, bad points, how can you improve. The judges are all amazingly helpful and so full of fleece knowledge! They have been a great source of help and encouragement to me over the years.”

Caroline’s winning Bluefaced Leicester fleece will now go forward to the Wales Country Final stage of the British Wool Golden Fleece competition, which aims to showcase the exceptional quality of British wool. The 2018 National Golden Fleece Champion will receive a competition salver and £1000 prize money, with Reserve Champion receiving £500. Fleeces can be entered at any British Wool depot or downloaded from the British Wool website. Find out more at https://www.britishwool.org.uk/golden-fleece 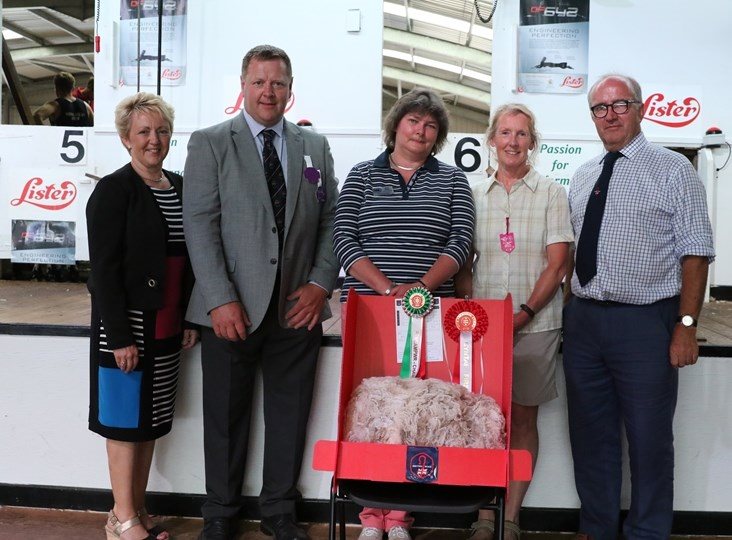