A Teeswater fleece is the winner of the 2019 British Wool National Golden Fleece competition, in association with JG Animal Health.

Entered by Pamela Morrish and Adrian Helm, the fleece has been recognised as the best in the UK. The 2019 Reserve Champion title was awarded to Sam McConnell from Ballymartin, Co Down with a Romney fleece.  The results were announced on Thursday 19th December at The British Wool National Golden Fleece Awards Presentation. The Golden Fleece is a nationwide competition open to all British Wool producers, aiming to highlight the quality of British wool. Producers from England, Scotland, Northern Ireland and Wales are invited to enter their fleeces at any of the eleven British Wool depots across the UK. In addition, the champion fleeces from 18 regional agricultural shows attended by British Wool were automatically entered into the four country finals.

On presenting the prizes to the eight finalists, Trevor Richards, British Wool Chairman, said: “British Wool handles more than 13 million fleeces each year, so for the eight fleeces that got through to the final of the competition, it is a tremendous achievement. The enthusiasm and efforts of the wool industry from all of the eight finalists was inspiring and their places in the final were well deserved.”

This year’s competition was judged by David Swinton, Quality Control Manager, who was keen to stress that this was no easy task, as every fleece in the final eight had its own individual qualities.

Pamela and Adrian keep a closed flock of Teeswaters in North Yorkshire, which they keep for their dual purpose of superb wool and meat. You will see their Teeswaters being exhibited at Great Yorkshire, Otley and other local agricultural shows throughout the summer.

Pamela Morrish and Adrian Helm, 2019 National Golden Fleece winners said, “We are delighted and overwhelmed that we have produced the Champion Golden Fleece for 2019. We have been lucky enough to receive guidance and advice from Ian Brooksbank, Senior Head Grader at Bradford Depot over the past few years, which we are very grateful for.”

Mr Richards concluded: “I would like to express my thanks to the industry in supporting The Golden Fleece Competition - the agricultural shows, our sponsor JG Animal Health and of course all of the competitors.” 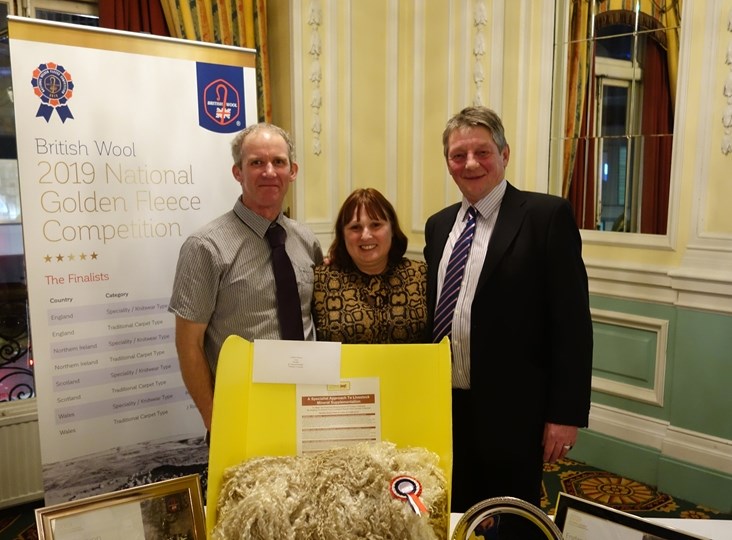