Leanne Has A Firm Handle On the Future

As we head into the 2018 shearing season and British Wool launch this year’s courses, we look back at the achievements of Leanne Pullen who is undoubtedly one of Scotland’s foremost wool handlers and mentors of the skill that is the very necessary companion to shearing.

Leanne, originally from Biggar, started her wool handling career when she was 15 and has rolled and handled ever since! Now married, Leanne lives in Lockerbie with her husband Stewart, a fellow shearer, and their 3 children, farming a unit of 3000 sheep.

Leanne joined the British Wool regional committee for the Dumfriesshire area last year.  As a Regional Representative, she sees one of her key roles as helping to help raise the profile of British Wool and to educate producers.

From aged 15, she spent the summer holidays helping shearing gangs, which sparked her passion for the industry.  Wool handling has taken Leanne throughout the world, and with the exception of lambing times, she spent several years rolling wool in Norway, New Zealand and here in the UK, where she has worked for a number of contractors including Peter Blain and Chris Griffin.

Leanne says: “I was in my twenties when I started competing, initially here in the UK, but I struggled to pick up the rosettes.  It was only when I started to travel in New Zealand and Norway that the tables turned. Not only did I learn from the people I met and worked with, they also gave me the confidence to compete which brought with it the successes.  Since then, most competitions I have been in I have either won or been in the final.”

Leanne has represented Scotland at three World Championships:  Norway in 2008, Wales in 2010 and Ireland in 2014. Her biggest personal achievement was when she scooped third prize in the Open Individual/Team Competition in Norway, and in Ireland where she won fourth in the individual and third in the team competition.

Some of her milestone handling days were in New Zealand: “Regularly some of the gangs I worked with would see each member shear up to 400 sheep in a day, as I was rousie for up to three shearers, I personally would handle and roll over 1000 fleeces.”

“The challenging days are of course when the sheep aren’t running, and you need to multi task and be the pen man, wool handler and the tea lady!”

It was when Leanne started competing that she attended her first British Wool training course: “I realised that I needed to learn how to compete, so I went to a course where Colin MacGregor was instructing.”

She adds: “I knew how to roll wool from a commercial aspect, the course I was attending focused on competitive wool handling. I learnt so much, it not only helped me fine-tune my skills, it also gave me a fresh perspective as to how British Wool would like to see the wool presented.”

“Although it can be difficult, on a large-scale farm with a variety of breeds of sheep, the different breed fleeces should be separated, especially those with coloured fibres. For those with different breeds of sheep on smaller holdings it is worth remembering that by wrapping and tying each fleece individually, it will make the graders job much easier and will result in a better price.”

Leanne’s favourites to handle and work with are Mule and Romney fleeces: “Mule fleeces are easy to roll up and you can make them look good. Romney’s, although more challenging, can be presented beautifully.”

Her personal love of wool is its versatility, resilience, and its ability to be used for so many different things.

Some people would say that once they have learnt to handle, that is it. Leanne advises on why this isn’t true: “Competitive wool handling has moved on a huge amount in recent years and it continues to improve, so the standard of competing has changed. Wool handlers are open to this progression and as a result we are now competitive on the World stage, whereas, in the past there was a massive gap and the UK struggled.”

Her own personal highlight is not about herself, it is about the next generation of wool handlers: “I instruct, and many of the girls I have mentored and worked with are now making names for themselves on a world-stage, which for me, is the highest of personal accolades.”

Her own personal handling lesson would be with the late New Zealand Wool Handler Joanne Kumeroa. “She was in a different class and streets above anyone then or now. A natural talent, down-to-earth, and more than happy to support and give advice to anyone. I was very lucky to meet her at the World Championship.”

New Zealander Joel Henare is her all- time wool-handling hero: “Brought up in the wool sheds in New Zealand, he just makes it look effortless.”

“I was a very nervous competitor, and someone, I can’t remember who, advised me how to get on top of my nerves. They told me: ‘Just bear in mind that what you are doing is what you do every day, you just need to make sure in the competition that you are working at the top of your game.’ This advice was instrumental in my success.”

Leanne gives her own piece of guidance to those wanting to learn or develop their wool handling skills: “Travel; take advice from anyone who offers it; and ask questions. Don’t pretend to know what you are doing when you don’t, and work with as many people as possible. You are never too old or too experienced to learn.”

This year, although not close to retiring, Leanne is enjoying a well-deserved year off. Looking at the longer term, her main aims are to continue to mentor and support the future generation, and of course, put her own children first. Aged just 3 and 7, Leanne’s two daughters Katie andGeorgie are already showing an interest in wool handling, whilst son Euan feels he is a step above and plans to follow his father as a shearer.

Leanne advocates: “British Wool is making huge leaps with education and promotion of wool, which will ultimately have a positive effect on the wool prices. This is exactly what every producer wants and of course helps to future-proof the industry.”

Colin MacGregor from British Wool said, “Leanne has tremendous experience and is without a doubt a Champion wool handler, perfectly demonstrating the importance of handling to the industry, and to shearing. Training is vital in helping you achieve maximum efficiency – whether it is sorting the wool crop at home, or stepping-up to receive the champion’s laurels in competitions.”

Anyone interested in attending one of the British Wool courses, should visit www.britishwool.org.uk to both register for a course and pay online (there is a 10% online discount). You can also find British Wool on Twitter and Facebook - @britishwoolfarm 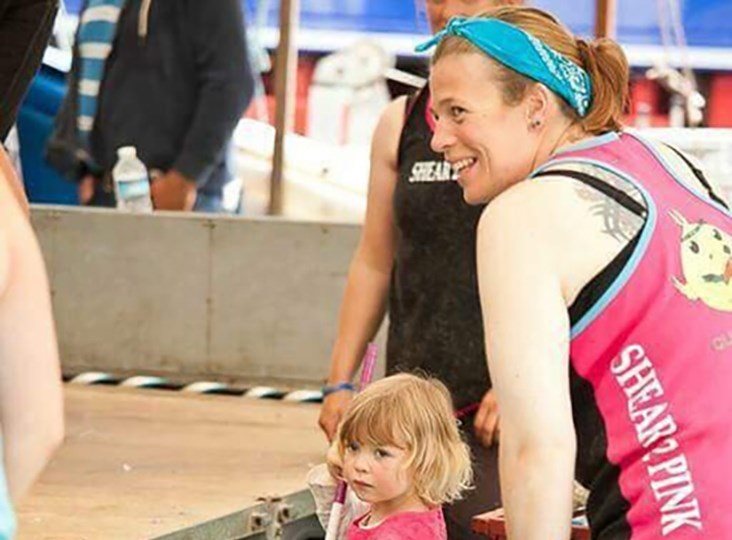