WORKING ON BEHALF OF OUR MEMBERS
Our mission is to drive sustainable demand for British wool in order to maximise returns for our members.
Home >  News >  Press Releases >  Glencroft launches Three Peaks scarf in aid of Yorkshire Dales charity

The scarf is woven in a traditional Yorkshire woollen mill from 100% lambswool with all profits from the sale of the scarves going to the Yorkshire Dales Three Peaks Project to support the maintenance of paths and combat erosion on Ingleborough, Whernside and Pen-y-ghent.

Retailing at £39.95, the scarves feature the Three Peaks Project logo and are the ideal gift or memento for those taking part in the 24-mile 12-hour Yorkshire Three Peaks challenge, which takes in Pen-y-ghent, Whernside and Ingleborough. Nestled at the bottom of Ingleborough, in their 200 year-old converted barn in the conservation village of Clapham, is Glencroft Countrywear.

Edward Sexton, partner at the family-run business which was set up by his parents Richard and Justina Sexton in 1987, said: “We’re delighted to launch this Three Peaks scarf range, which comes just in time for the cooler Autumnal weather. Many of the paths up to Ingleborough begin in Clapham so it is very much our pleasure, as a local business, to be able to support the Yorkshire Dales Three Peaks Project and all their work to preserve and support our local environment, in this way.

“Not only will the scarves keep people warm using natures’ best fibres, they really will last the test of time. They are the ideal gift for anyone who's planning to, or has already walked the Three Peaks, lives locally or who, like us, just wants to show their love of this part of rural North Yorkshire,” continued Edward.

The Three Peaks Project was set up in 2009 and is part of the Yorkshire Dales National Park Authority. The project aims to ensure that the Three Peaks area is maintained and improved by generating a sustainable income to help pay for its management. 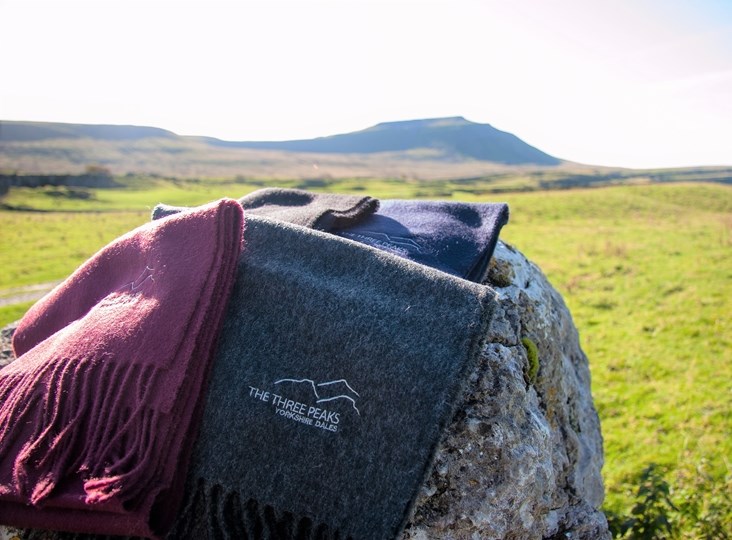