British Wool Sales auction reports are added after every auction sale. The latest reports are available to view and download below.

British Wool continues to see strong demand and strengthening prices in its auctions.  BW130 benefitted from good levels of competition and prices were firm to dearer across the board.  The offer included a small number of speciality lots which were particularly well sought after.  The offer amounted to 1.119m kg of new season wool and every lot offered sold. Read More.

Demand held firm in BW129 with prices firm to dearer across the board and good competition.  The strong gains seen for mountain wools in BW128 on 7 September held with Blackface wools continuing to strengthen.  All of the 1.19m kg of wool sold was from the new season and just two lots failed to sell.  The clearance was 99%, the average greasy price moved up to 73p / kg and the British Wool index gained 2.5% reaching 1.063 per kg. Read More.

British wool saw solid demand for all types offered in BW128 with strong competition for Mountain Wools.  Blackface and Welsh both saw double digit price increases over the previous sale.  All of the 1.21m kg of wool sold was from the new season and just two lots failed to sell.  The clearance was 99%, the average greasy price held above 70p per kg, and the British Wool index increased to 1.033 per kg. Read More.

Pricing held firm as British Wool increased its offer to almost 1.2m kg in BW127.  The offer was predominantly new season wool with only 22 tonnes remaining from the old season.  Mountain wools saw good competition with prices increasing by several pence per kilo and a selection of speciality lots also sold well.  The clearance was 95% with the average greasy price moving back above 70p per kg and the British Wool index was fractionally higher at 1.03 per kg. Read More. 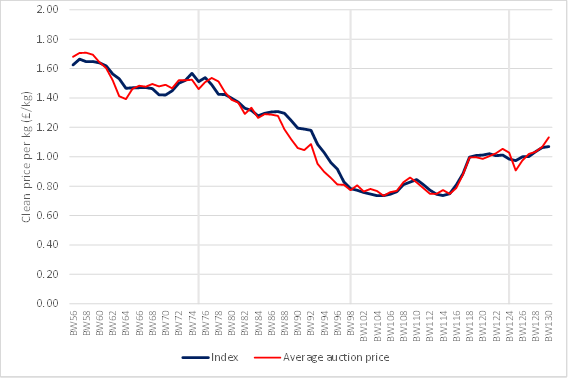 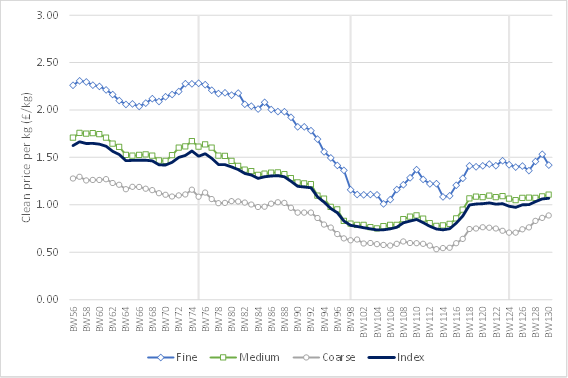 Do you have a news story you’d like to share with us? A new product launch, new product photography, event or achievement? Complete the form to send the details to our Marketing team, and we’ll review for publication on our website and social media channels.

Please fill in all required fields
Thank you, your message has been submitted